During the last few decades, Dr. Gary Fiskum and his colleagues from the University of Maryland School of Medicine Department of Anesthesiology have accumulated considerable evidence from animal research that normoxic resuscitation following cardiac arrest results in better hippocampal neuronal survival, less neuroinflammation, and better neurologic outcomes than those observed following hyperoxic resuscitation. His recent work with Ms. Bin Da Lee, a second-year medical student at Maryland, extends these findings, demonstrating that survival of cerebellar Purkinje neurons is also better following normoxic compared to hyperoxic resuscitation. These results taken together with those from increasing clinical studies support the AHA ACLS guidelines that supplemental oxygen following cardiac arrest should be titrated to the minimum level necessary to maintain an arterial oxygen saturation of ≥94%, thus reducing the risk of oxygen toxicity.

Traditional tools for assessment of metabolic health rely heavily on BMI and the clustering of cardiometabolic risk factors seen in metabolic syndrome, but they do not predict risk of adverse cardiovascular events well. Evolving technologies of “liquid biopsy” such as metabolomics have enabled a more granular assessment of dysregulated biochemical processes and thus may themselves serve as better markers of metabolic health. Recent studies in our lab using metabolomic profiling have identified a variety of biomarkers that are associated with obesity, insulin resistance, DM, CVD, and response to interventions. Therefore, we sought to determine if novel cardiometabolic disease biomarkers improve traditionally defined metabolic health in predicting risk of adverse events independent of weight and across BMI categories. We found that four novel metabolic biomarkers including NMR-derived lipoprotein parameters, LP-IR (lipoprotein-insulin resistance), GlycA (a novel inflammatory biomarker that is an aggregate measure of enzymatically glycosylated acute phase proteins), HMSP (the sum of medium and small chain HDL particles), and SCDA (short chain dicarboxylacylcarnitines) predict risk of adverse events in a cardiovascular cohort and improve upon traditionally defined metabolic health measures across all BMI categories. As such, these novel biomarkers may serve as better markers of metabolic health than our current traditionally defined metabolic health measures and thus may serve as biomarkers for identification of those individuals at highest risk of major adverse cardiovascular disease event regardless of weight.

There is a concern that infant anesthesia exposure is neurotoxic and results in long-term neurodevelopmental impairments in children. Two years after exposure to anesthesia during infancy, gliosis (increase in GFAP) was found in the brain of non-human primates. The novel finding indicates that there are long-lasting histopathological changes associated with infant anesthesia exposure that can be related to neurodevelopmental deficits.

Clinical studies have shown that dexmedetomidine ameliorates cognitive decline in both the postoperative and critical care settings. Preclinical studies suggest that the benefit provided by dexmedetomidine is mediated through unique mechanisms in these different settings with the imidazoline receptor-mediated inflammation-resolution being pre-eminent in the postoperative setting and a2 adrenoceptor-mediated anti-inflammatory action dominating in the setting of administration to optimize the management of patients who are at risk of developing hospital- acquired cognitive decline. 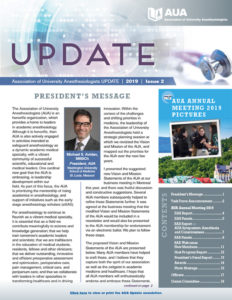